9 of the most incredible spots to go Bungee Jumping in the U.S.! 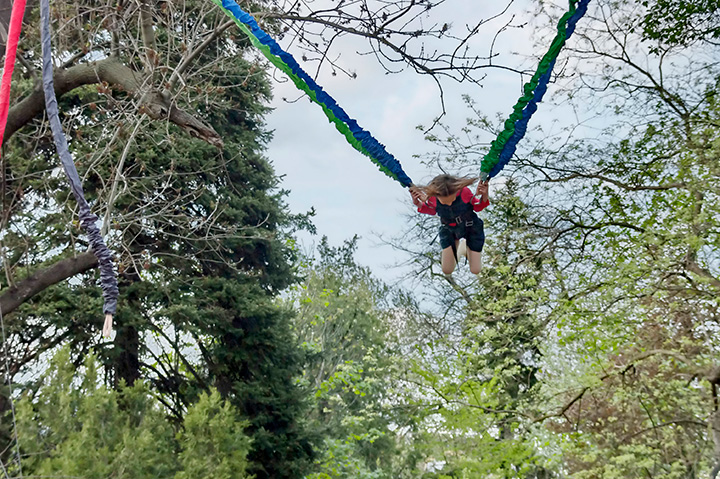 "Here, tie this big rubber band to your ankle and jump off a tall building" they said. "It'll be fun!," they said. "We'll even clean up the vomit," they said. Well, apparently, "they" were right, because bungee jumping is one of the most popular activities for adrenaline junkies.

Modern bungee jumping is said to have begun in England on April Fool's Day, 1979. A couple of cheeky students from Oxford University's "Dangerous Sports Club" donned top hat and tails, attached bungee cords to their ankles, and jumped 245 feet off a bridge in Bristol.

Bridges are popular places to jump, but giant cranes, tall trees, big rocks - and even some buildings-prove irresistible to folks who can't get enough of the ground rushing up to meet them.

So grab a helmet - and a vomit bag - and head to these 10 nutso places to bungee jump in the U.S. (Note - many of these destinations are accessible only through a licensed bungee jumping company. Check first before packing your gear).

It's not quite the nose-bleed height of some locations, but at 70 feet, you can get a pretty decent rush. It's a favorite of folks who've never experienced bungee-jumping and want to take the plunge.

It's one of the tallest suspension bridges in the world - but bungee jumping from it is only legal 3 days of the year, during the GoFast! Games. Extreme sport-types do their best to set records during the 150-foot plunge.

It straddles the Snake River, and is a favorite for the bungee jumper with some experience under their belt (or ankle?). The reason being is the super-strong winds that add to the adrenaline of the 400-foot fall.

As the 10th highest bridge jump in America, this one is breathtaking: literally. It's located on the north rim of the Grand Canyon, and offers a 467-foot drop towards the Colorado River.

This ranks among the highest drops in the world (680 feet). If that's not tempting enough, the glorious New Mexican landscape and the rushing Rio Grande River below should do it. Note that there are numerous restrictions on when you can actually make the jump.

It's a twist on the typical jump, because you jump from the 108th floor of a hotel. But it's not a complete free fall (that could get messy): instead, you're tethered to a support cable system that makes the fall less "jerky." Since you're plunging 829 feet, that's a good thing.

Many towers built for bungee jumping drop you through a trap door. And where's the fun in that? With this one, you either have to jump, dive, lean or fall off the edge. But once you work up your nerve, you're rewarded by a 150-foot drop against the gorgeous backdrop of Mount Hood.

Located in the Olympic National Forest, this 365-foot plunge has beautiful natural scenery from every angle. You'll have to view it upside down though, as you fall towards the Skokomish River.

It was built in the 1930s as part of a road project, which was abruptly cancelled (hence the "nowhere"). Getting there and back requires a 10-mile hike through the San Gabriel mountains, but once you reach the bridge, the effort is worth it. The 100-foot freefall sends you rushing headlong towards the San Gabriel River.

Yup, those redwoods. The giant trees that tower hundreds of feet above terra firma. Bungee Adventures is a company with the only legal permission to bungee jump within the stand of ancient trees. The adventure begins by climbing one of the trees, doing a tightrope walk between them - then jumping from 200 feet up.